the red stripe of the ribbon goes at the level of pins 19 and 20, pins 21 at 22 are not connected to the ribbon connector.

I'm not sure if I misread a post in this thread but I found out the reason why it wasn't working - because I skipped the first 2 holes when I initially installed the header pin.

So tonight I desoldered the header pin, reinstalled everything then and BOOM it worked!

Now when browsing the different menus or using the jogwheel the screen displays vertical lines.

Whats interesting about this is that the lines "pulse" depending on the action.

For example, if I'm browsing the internal hard drive's files using the jogwheel the lines will come and go in a consistent pattern.

Not sure what's going on but I decided to swap back the display for now until I get it sorted.

At any rate, thanks a mil @Bumathan for dropping that gem.

I knew it had to be something simple.

If anyone has any suggestions about the lines ~ drop em in the thread. 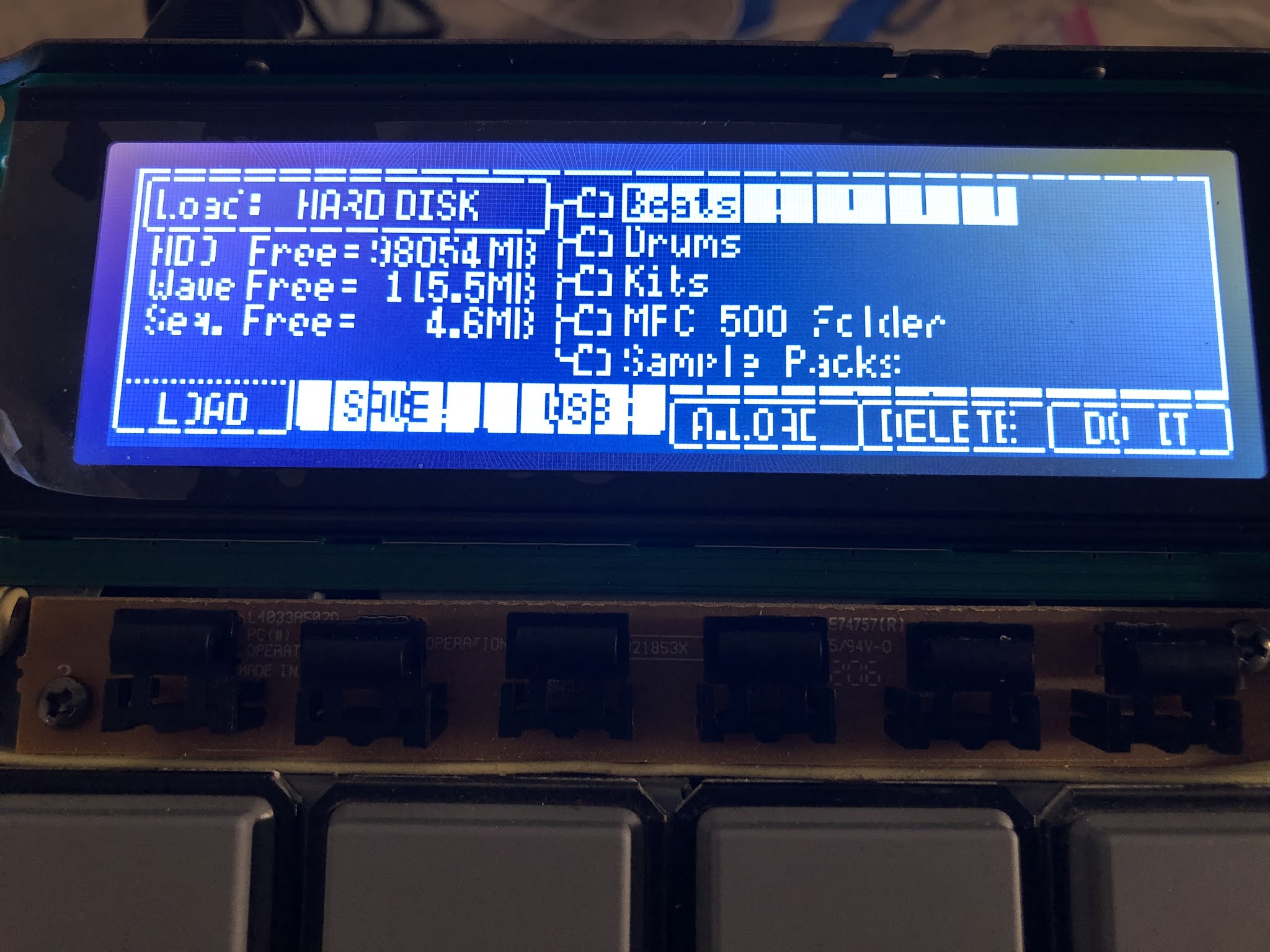 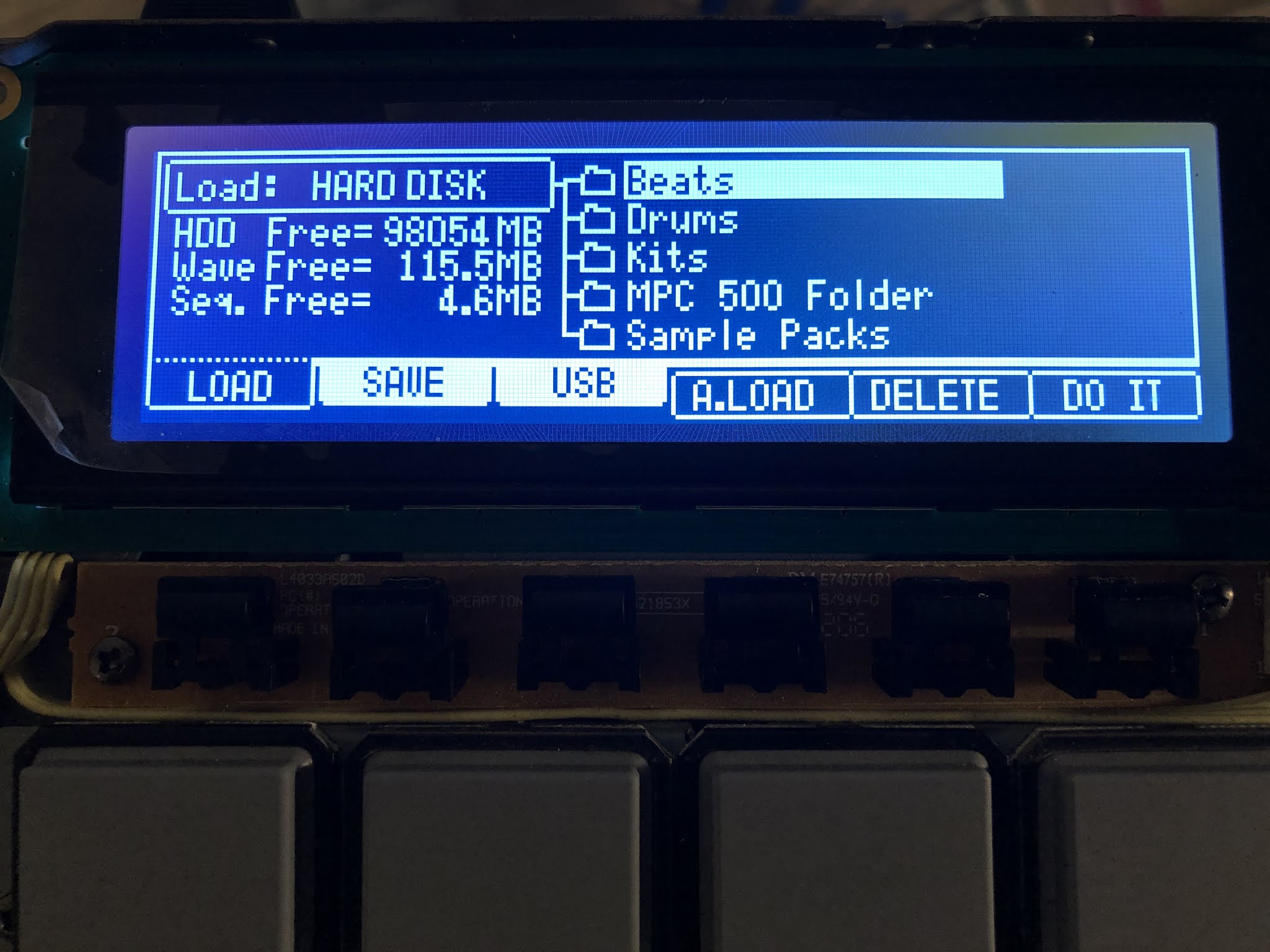 As you can see the display works but if you use the jogwheel those lines appear.

By Riva Lima Fri Apr 02, 2021 1:32 am
Hello, guys! REALLY a very interesting post about the LCDs used in Akai Mpc! I am also a user of an Akai S3000XL and I am in love with it, but I would like to move to another model and brand ... for example, Roland has the iconic W30, which I also love, and I ended up buying an LCD from China, in which the datasheet shows to be different from what exists in Buydisplay ... follow the image for you to see ... so, my LCD just doesn't work properly, pin 2 of the lcd needs to be disconnected, so that the display light turns on. .. and because of that, a friend told me that his display has the datasheet with the numbers 1, 2, 3 different as the image ... as i would do, does anyone have any ideas? In the Buydisplay datasheet it would be 1 (GND) 2 (GND) 3 (VCC) ... in the datasheet of my Chinese display, it is 1 (FGND) 2 (Vss) 3 (GND) ... sorry for the post about other equipment, but I saw that you guys used a solution using a display of the type I bought, and you must have experience in this case ...

By Slump Thu Apr 08, 2021 2:26 am
Woah, this thread is still alive! Yes everyone, this mod is easily doable with only beginner soldering skills. If you've never soldered before practice first by replacing the tact switches and jog wheel of the MPC 1000 because we both know they need to be replaced anyways. Also there is literally 0% chance of bricking your MPC 1000/2500 by doing this mod, although you may brick your "buydisplay" if you connect everything up wrong, but even then that chance is small because these displays are pretty resilient. And as previously stated in this thread, desoldering the old display cable is doable but muuuch harder than you think it will be and not worth the hassle when making a new cable is so incredibly cheap.

I'll try to summarize this mod:

What you will need:
BuyDisplay 240x64 in the color of your choice.

-Do not get the 2x11 pin header soldered onto your display from the factory because you want an IDC connector not a pin header on the display.
-Technically this mod will work with a 240x128 BuyDisplay as well, but it won't come with a fancy casing like the 240x128 screen you can get off mpcstuff

20 Position IDC "ribbon/flat" cable
-You will need a minimum of 10 inches of cable to do this mod, thus it's worth the extra expense to get a longer ribbon cable just in case you **** up. Buy at least 15-25 inches of cable.
-2.54 pitch cable, 28AWG with a minimum of 20 pins is all that matters. If a cheaper option has more than 20 pins you can always peel off the extra pins from the cable. It doesn't matter if you get either the rainbow colored cable or grey cable with the red line at the bottom.

-These suggested amazon links are merely for reference purposes. I'm not saying you should buy from these links or that they are the best deals. They are literally just the first thing I found while looking for the connectors and cables to write up this post and are intended to merely give you an idea of what the cables and connectors look like
-With that said, I highly highly suggest you buy extra connectors just in case you **** up. Just like with buying extra cable, it's better to have more than not enough when working on an electronics project. I personally bought a pack of 10 connectors for both the male and female ends and while making my cable I broke three connectors just trying to crimp them onto the wire. Crimping by hand/pliers is a simple process, but more difficult than you would think! Buy extra just in case!

Tools
You will also need a soldering iron (obviously), black electrical tape, wire stripper and a multimeter to check your connections if you're not confident with soldering. You will also need some small wire to cut into three parts to jump the pins. You can recycle this wire from broken electronics you have lying around or you can buy some basic 22 AWG wire or something. It doesn't really matter the AWG size just as long as it's not too big to fit.

First things first is to make the cable. 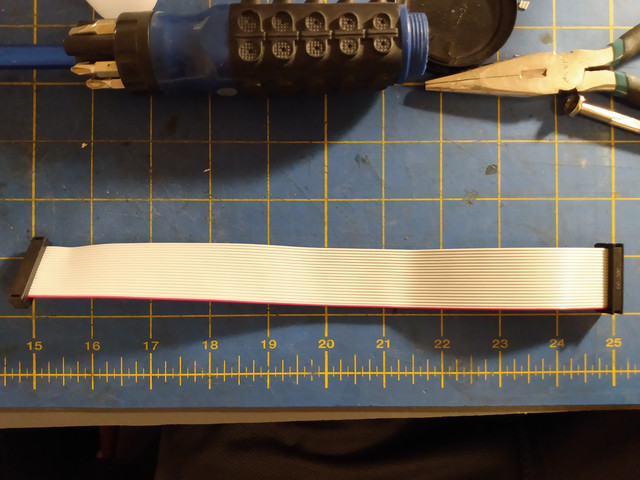 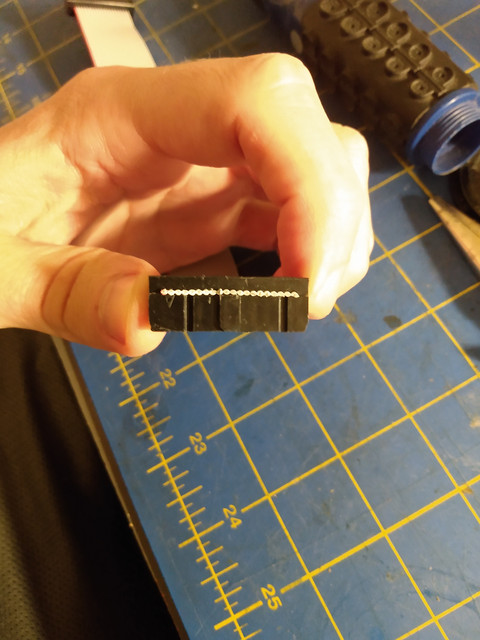 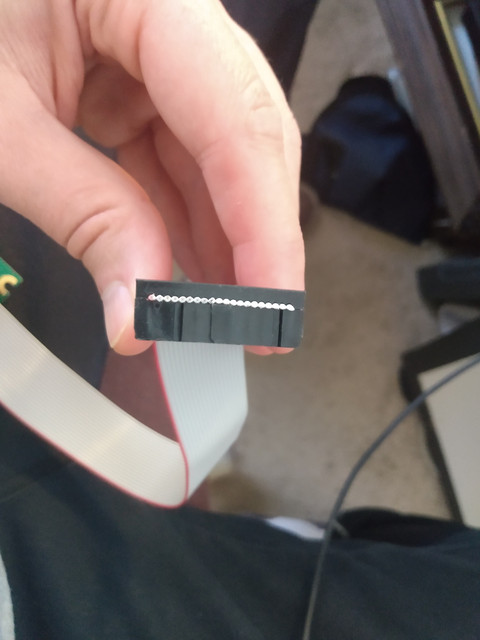 --Tips on crimping--
As you'll see crimping is harder than it looks. I suggest you start by pushing down on the top part of the crimp in order to make an indent. Then take off the top part or header or whatever and get a small flathead screwdriver and push in on the cable from the outside ends and then the middle section between the pins. Keep cycling between using the detachable header part and using a screwdriver until it clicks into place and is locked. 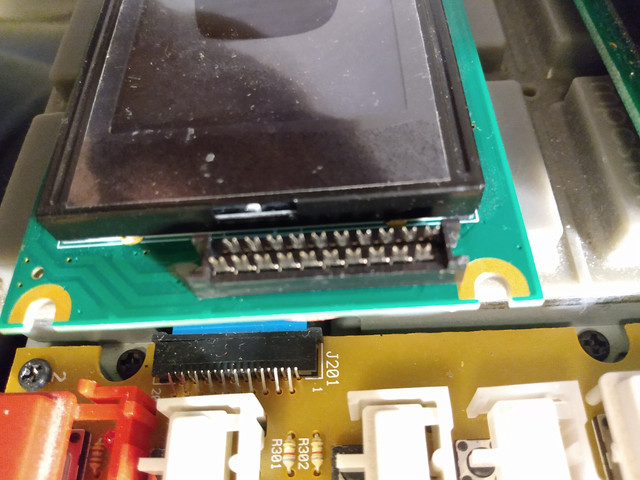 Soldering
1. Use the electrical tape and make sure the male connector is flush against the BuyDisplay PCB. Then just solder all the pins. Easier said than done for a beginner, but very doable. Don't worry about putting too much heat on the PCB, it can take wayy more heat than you think. These things are not as fragile as you would imagine. 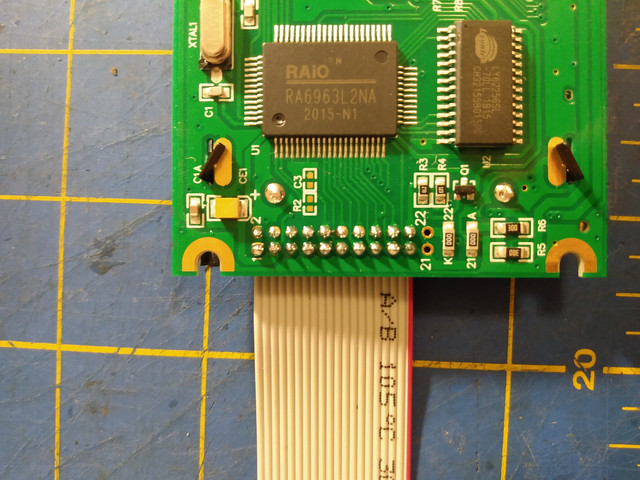 2. Now solder a small wire from pin 9 to pin 20. It's important to do this wire connection first because soldering it last will make it harder to solder due to less room.
3. Then solder Pin 21 to Pin 3
4. Then Solder Pin 22 to Pin 2
*remember to tin your wires first, it makes the job much easier 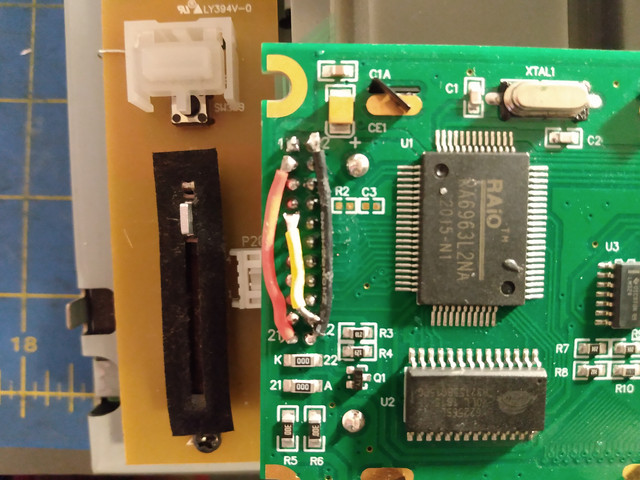 Now you're done. Just flip over the MPC and test it out by plugging in the screen. Make sure the arrow on the female connector matches with Pin 1 on the MPC 1000 PCB 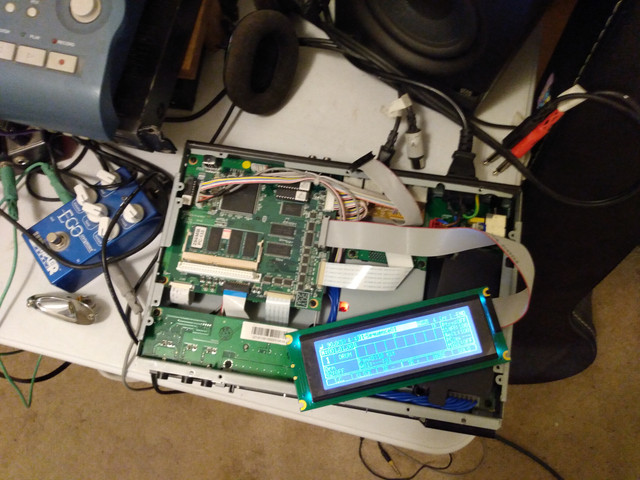 *It's worth noting that a lot of light leaks from the sides of the screen. Use the black electrical tape to tape over the sides that leak light. 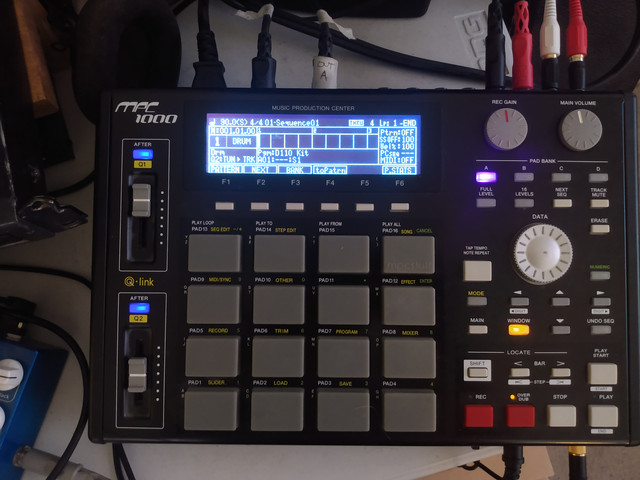 SFTRAXx wrote:As you can see the display works but if you use the jogwheel those lines appear.

Looks like a faulty connection somewhere between pins 5-8 or maybe pin 10. Not sure though, but it's not dead pixels on the LCD nor does it seem to be anything on the databus because all the info is being transmitted. Looks like the refresh rate as the problem.

Bumathan wrote:I'm not super happy with the color and contrast of this display. It's supposed to be white on black background but it's more dark blue... Well it's not an OLED..

You have to adjust the contrast to get it white on black.
Slump
New Member
Posts: 4
Joined: Wed Jan 18th, 2017

SFTRAXx wrote:As you can see the display works but if you use the jogwheel those lines appear.

Looks like a faulty connection somewhere between pins 5-8 or maybe pin 10. Not sure though, but it's not dead pixels on the LCD nor does it seem to be anything on the databus because all the info is being transmitted. Looks like the refresh rate as the problem.

Right on for chiming in!

I believe I may have toasted it

the first time around so I ordered another LCD, new ribbon cable, etc and will give it another go in a week or so as time permits.

I really like the look so to me its worth it and still more cost effective to cop another one.

Thanks for posting these pics btw. (wish they existed before I learned on my new LCD but thats how it goes sometimes

Slump wrote:
2. Now solder a small wire from pin 9 to pin 20. It's important to do this wire connection first because soldering it last will make it harder to solder due to less room.

Let me add to this that the wire (from pin 9 to pin 20) can get pierced by a solder connection below it if not routed correctly.

Something to be mindful of...