By elmacaco Tue May 03, 2005 9:52 pm
OK guys here's where we want to put all the bits of info from the archives that is really useful for quick reference and easy access. Lets keep it straight Information, when you dig something up, put it in here if it's dope.
Maybe edit your posts to add deeper info and to keep like shyt together.

http://www.midi-rakete.de/eng/elfolie.htm (they have instructions with pics on how to change them, very good quality foils)

http://www.backlights.co.uk (I didn't like the quality from them, but it was only one so it could have been a fluke)

You can order a backlight in different colors, Forat will modify a 3000 backlight which turns the display yellow, which is supposed to be very clear, but I have never seen a pic so I can't vouch for that. Most people go with blue or green, but there is a white backlight which is what I use, it's very clear to read, but the color is more of a light blue than white.
You can see pictures of both blue and white backlights close up in the MPC60 Yahoo Group photos section.

Teac FD-235HF Drive, with jumper block on the back, jumper settings are shown Below (thanks DJames!) 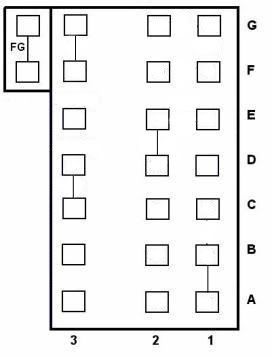 Some have reported success with this same model drive with smaller jumper blocks, but few details are available.

Q: How do I find out if my MPC60 has the Marion Systems MPC-SCSI hard disk interface installed?
A: If you have an MPC60-II and the rectangular hole in the upper middle of the rear panel has no connector in it, you don't have it. If you have the original MPC60, the connector labled "RS232C" on the rear panel may be either the original RS232C connector (which was never used) or the true SCSI connector. Check the operating system number when you start up your MPC60. If you have version 2.14, you have a SCSI interface (v.2.14 was the only version that shipped with a SCSI interface). If not, run this test:

If you have an MPC 60 you should be using DD/DS 720k Disks. Using HD 1.44Mb disks causes saving errors and data corruption much more easily and will eventually damage your drive. you can tell the disks apart by the holes in the upper corner, the DD/DS have one square hole in the upper right hand corner with the write protect switch in it, HD disks have that and an extra hole on the upper left. Covering that hole with tape will trick the drive into receiving that disk, but it should only be used as little as possible (to get data off a disk, then save to a propper 720k disk).

If your 60's floppy drive has been replaced with a more modern one that can read HD disks, then this doesn't matter as much as far as I know, but the 60 will still format them as DD/DS disks.

All floppies you use should be formatted in the 60 before use. it is a good idea to have a bunch formatted and ready. Especially if you have one of the 2.xx OS's, since you might lose internal data when you format a floppy.

By elmacaco Wed May 04, 2005 10:57 pm
Record and save a sample that you want to chop.
then go back to the sampling screen and set your sample time to 0.1 second and sample nothing (silence). If your Threshhold is too high it won't trigger the sample with silence, but if you have your Turntable hooked up and the needle on the record (which, since you are sample, should be the case) you just need to bump the TT or the table it's on and it will trigger the sampler without sampling any noise. Silence is not critical though.

save the sample and do it a few times (for as many chops as you need).

The go to the main sample in the edit sample page (Sounds > 6).
Set the play X button (Soft Button 3) to play zone [it's on the right, second field from the bottom] and set the zone on what you want to extract.

Once you got it, hit copy zone to temp.
Then go to one of the blank samples, still in Edit sample screen, the zone should be set to .100 on both start and end.
Go to the the <do it> button field at the lower right where you select copy to temp and delete before soft start, etc. Change that to INS TEMP TO ZONE END.
Once that's copied, you need to set the soft start and soft end how you want it, wide open if you zoned it right, but the soft start should be at 000.100.00 which is the silence that created the sample.
Then go back to the <do it> menu and set it to delete before soft start so you can delete the silent 0.100 that you started with when you press <Do it>.

I'm quick with that now. It sounds more complicated than it is, once you do it a few times you zip along. Its not the fastest method, most of my samples I just do straight from vinyl, but if I grab a bunch of hits in a sample, I'll zone them out this way.

the smaller the zone the less time it takes, so I tend to use it for drums, whatever the longest section of the sample is, that's what I keep there and then zone out the smaller bits I want.

at it's worst it takes about a minute, but it can feel like forever, sometimes it takes a while and you just gotta leave it alone, also you gotta make sure that where you are pasting is right in the zone field, I had an error once where I had the zones at zero and I pasted something and the machine stayed pasting for too long so I shut down, I consider that a crash, but I did something stupid, that's why it happened,

The something stupid was:

I deleted the .1 second section before pasting, so the sample had no data, and the zone was still set to 00.100.00 so it was trying to paste in a non existant location. It only was possible because I delete the silent sample first, the zone settings didn't update, normally it won't let you set the zone beyond the sample length.

be patient, it can really give good results. Another good thing is if you set the zone to how you want it but don't have a silent sample to paste to, you can go sample it and then go back to the sample edit screen and your zone stays how you set it unless you switch sounds in the edit screen. When you hit sounds 6 after sampling the silence, you go right back to the same sample with your zone settings Intact. Copy it into temp then you go to the new silent sample and paste. I am not sure if you can copy the zone to temp and then sample the silence, I wouldn't recomend it though, I think the temp memory would be cleared when you enter sampling.

I like the control of sampling into the 60, I can turn stuff up or down and get different results, plus I love chopping on the 60, for longer samples I just back cue the record and sample and trim again, but for short things I do the zones, and sometimes for long things depends if I am feeling impatient or not.

Everyone witha 60 should know how to do this and try it at least once, and get to know that do it menu, it's got play before zone, after zone, before soft start, after soft start, so you can do really precise chops and edits like pulling out pops and clicks with the Silence zone feature.
Last edited by elmacaco on Thu May 12, 2005 5:39 am, edited 2 times in total.
elmacaco
Moderator
Posts: 9908
Joined: Mon Feb 17th, 2003

By 2wice Thu May 05, 2005 3:08 am
The RS-232 serial port on the back of the MPC60 MK1, according to a support rep at http://www.rogerlinndesign.com was designed to be used for an external screen. The port itself was never implemented, and the video output was put off until 1994 on the MPC3000 when it was made into an actual VGA output. Once again, Linn was thinking ahead...
2wice
Valued Member
Posts: 730
Joined: Sun Feb 27th, 2005

By drumat!c Sat May 07, 2005 2:49 am
damn man - someone needs to ask linn to give us a revised update to the 3.10 os - I really wish we could cut off more than 2 drum pads.....wouldn't it be nice to have 4....I was thinking about a global cut off or a sub group cut off but that might make things difficult......maybe it's not even necessary as all one might need to do is copy the drum sound to another pad of which they wish to be cut off by 2 additional pads.....hmmm now i'm confused....wait no i'm not. ok nevermind.

By elmacaco Thu May 12, 2005 5:38 am
If you've gone to the Edit>6. Copy Events page, and tried to change the ticks field with the data wheel, it appears that you can only change the bar number. Not True!!! If you use the number pad you can enter any valid tick number.

There is a reason the number pad is in the middle of the panel, dont forget to try it when you think things are difficult.
elmacaco
Moderator
Posts: 9908
Joined: Mon Feb 17th, 2003

The Play X Button is your long lost friend!!

On the right side of the screen, second field from the bottom, there is a field that says Play X:All.

If you click to the ALL part, you can scroll this to Zone, Temp, Before Zone, After Zone, Before Soft Start, and After Soft End.

When you are setting your start point, set it to before soft start and you can alternate hitting Soft button one and soft button three to hear exactly where and what you are cutting off. Switch it to after soft end for the end point cutting.

This has made editing much faster for me, even though it is really fast without it, it lets you use your ears more this way.